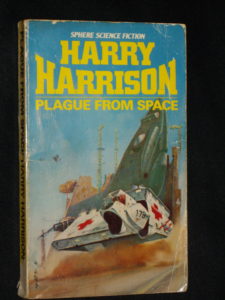 This is my first sci-fi book review and consequently it isn’t likely to be very good.  How fitting then that it should be about a book that isn’t very well written.  There’s a lot of action in it which is OK but never great and there is a love affair that is very thin indeed.

Just as well science fiction isn’t all about the writing!  Introduce a new idea, or maybe popularise or develop an old one and that’s a contribution to the cultural and intellectual  wealth of humankind right?  Now how many movies and TV episodes have we seen in which a plague is delivered via a space ship to the unexpecting denizens of some future land?  If you’re me you’ve seen quite a few.  Do these stories owe their existence to this book published in 1965?

Google suggests not. Apparently there was a TV series called Tales of Tomorrow with an episode in 1952 called Plague from Space (see http://www.imdb.com/title/tt0717040/  ) that appears to be built around a rather similar idea.  And I reckon there’s a pretty good chance the storyline was hanging around before then.  This is an interesting case study on how hard it can be to judge the worth of any sci-fi (or pretty much any other work of art or even invention for that matter).  You can’t really judge the originality of a book without having read everything written before it, and who has the time?

Lest this seem like an entirely academic topic, can we judge the greatness of 1984 if we are totally unfamiliar with We by Yevgeny Zamyatin? We sure as hell shouldn’t, but it doesn’t seem to stop anyone.  Rant, rant…

I should mention I liked the scenes at the end on Jupiter.  The aliens were quite interesting.  I should also mention that Harrision saw fit to revise and I think expand the story and release it as The Jupiter Plague.  It’s likely to be more polished – Plague From Space strikes me as a bit of a throw-away.