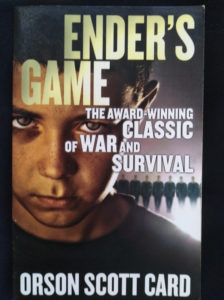 Well it’s famous isn’t it?  So if you want a proper review you can get one of 1000s from the web, or go to Wikipedia.

It is well written and I enjoyed reading it.  Orson Scott Card cites Asimov as a major influence and I can believe it as they both have an easy-to-read, more-ish quality to their writing.  This book though is much more like a Heinlein: boy goes out on space adventures, is better than regular people, beats the bugs.  A bit like Starship Troopers combined with Assignment in Eternity and add a dash of Space Cadet.  Unlike a Heinlein the protagonist does feel guilty at the end of the book and has little control over his destiny.

It’s stand-out features I guess are the space battle game which is explained in great detail, the game on the computer pad (ahead of its time) and the compelling, easy flow of the writing. Apparently the series was conceived around Xenocide (the third book in the series) and this one was just an nice bonus.