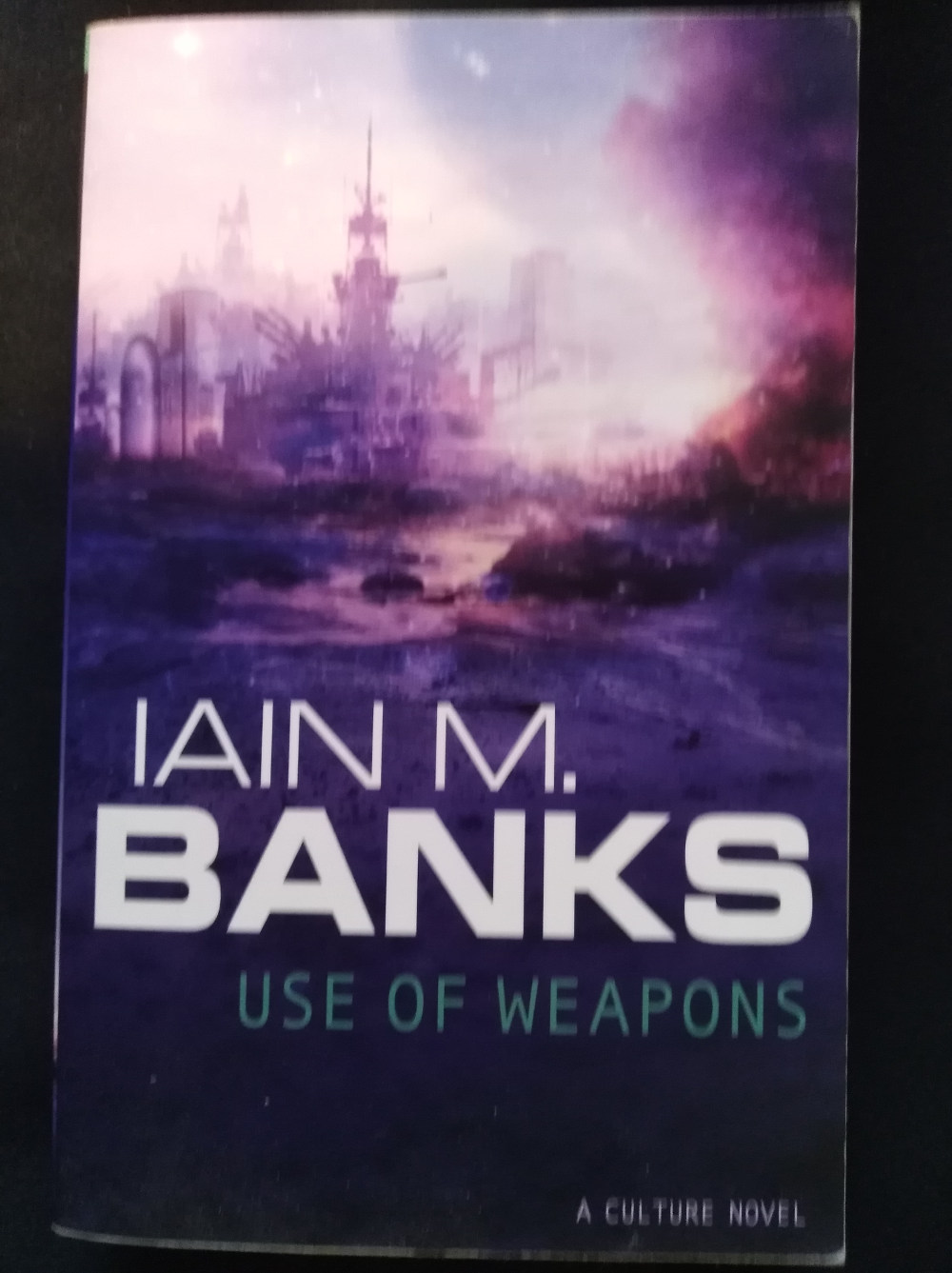 There must have been something in the air in the 1990s because authors all of sudden decided they need to structure their novels in piecemeal ways with bits of plot coming at you willy-nilly.  The English Patient and Last Orders both won the Booker Prize for their disorderliness, Use of Weapons not so much.  It still, however, racked up an award or two.  Personally I would have been happy to have given all of these books a miss. When you play around with structure you can destroy tension, which is a bit of a problem – it took me half a year to creep through Last Order, and it’s not a long book.  That’s not to say that all books need to be packed with tension – art has its place.  Recently I read Report on Probability A (Aldiss) and it’s crazy repetitive, but there was a good reason for it.  In Use of Weapons I mostly I got the feeling the author was involved in some kind of writing exercise and I was never engaged.  Still, if you can’t experiment in sci-fi, where can you experiment? This is the the third of the Culture series.  Again I recommend the… 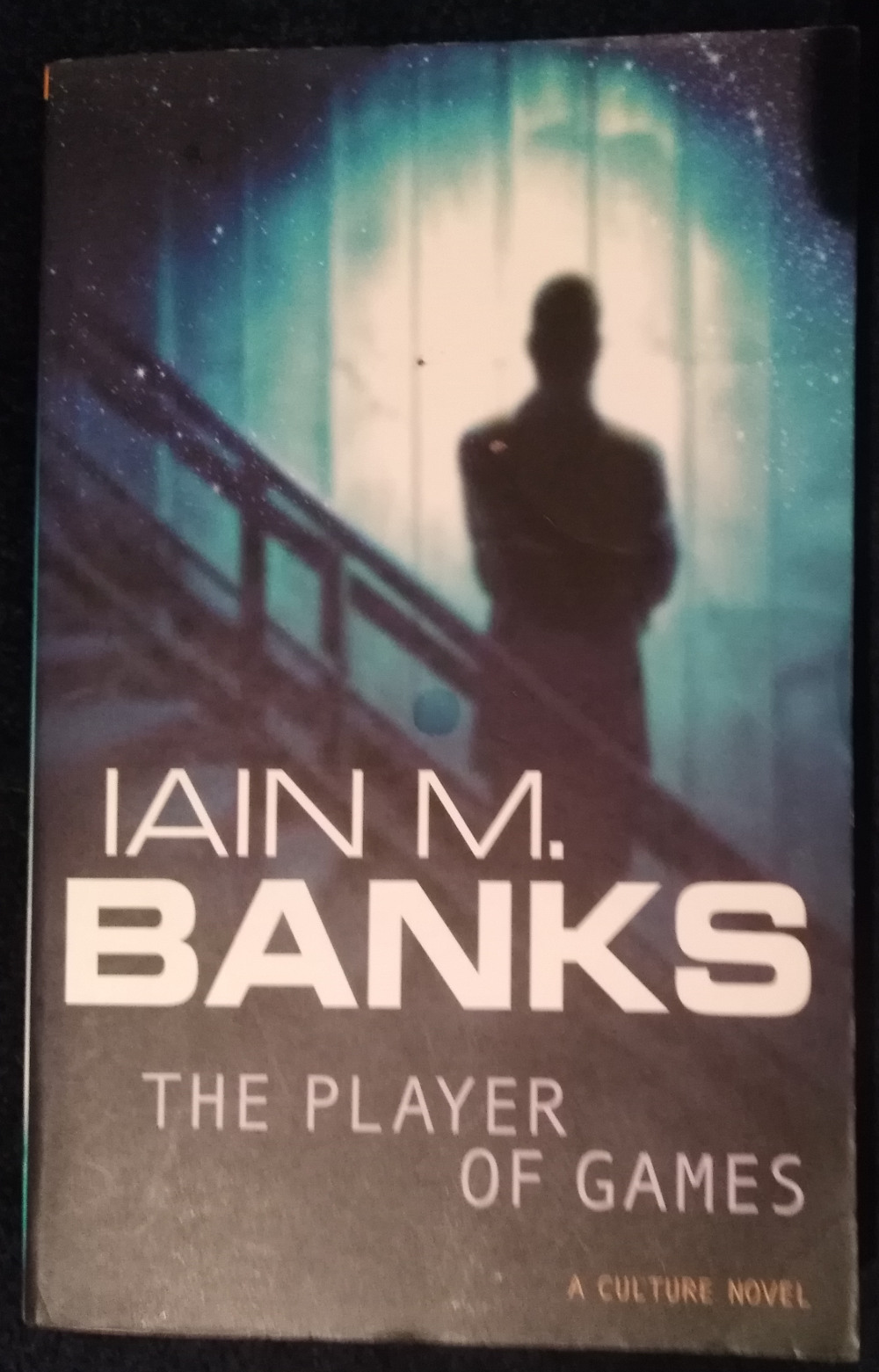 I enjoyed this novel very much, and I even bought a copy for one of my brothers.  He hasn’t said anything about it so maybe he didn’t like it, but then again he may not have read it.  I don’t think he likes sci-fi much… so why did I buy him an Iain M. Banks novel then?  Hmmm… Like Consider Phelbus which I seemed to be reviewing only minutes ago this novel has lots of detail.  In this case I think it gels better. We are treated to a good inside view of one of Banks’ space cities.  To me space cities makes sense – there’s so much real estate up there, why not use it?  There’s no gravity well, no friction to worry about, etc.  People these days always seem to be obsessed with finding habitable planets – but why?  Shouldn’t we be looking in the space between the planets?  This is the first book I read that really took this idea to heart, and described convincing space cities. Anyway, what are people to do in a future where machines are smarter than them and nurse over them and everything is geared towards them becoming decadent lotus eaters?  Well,… 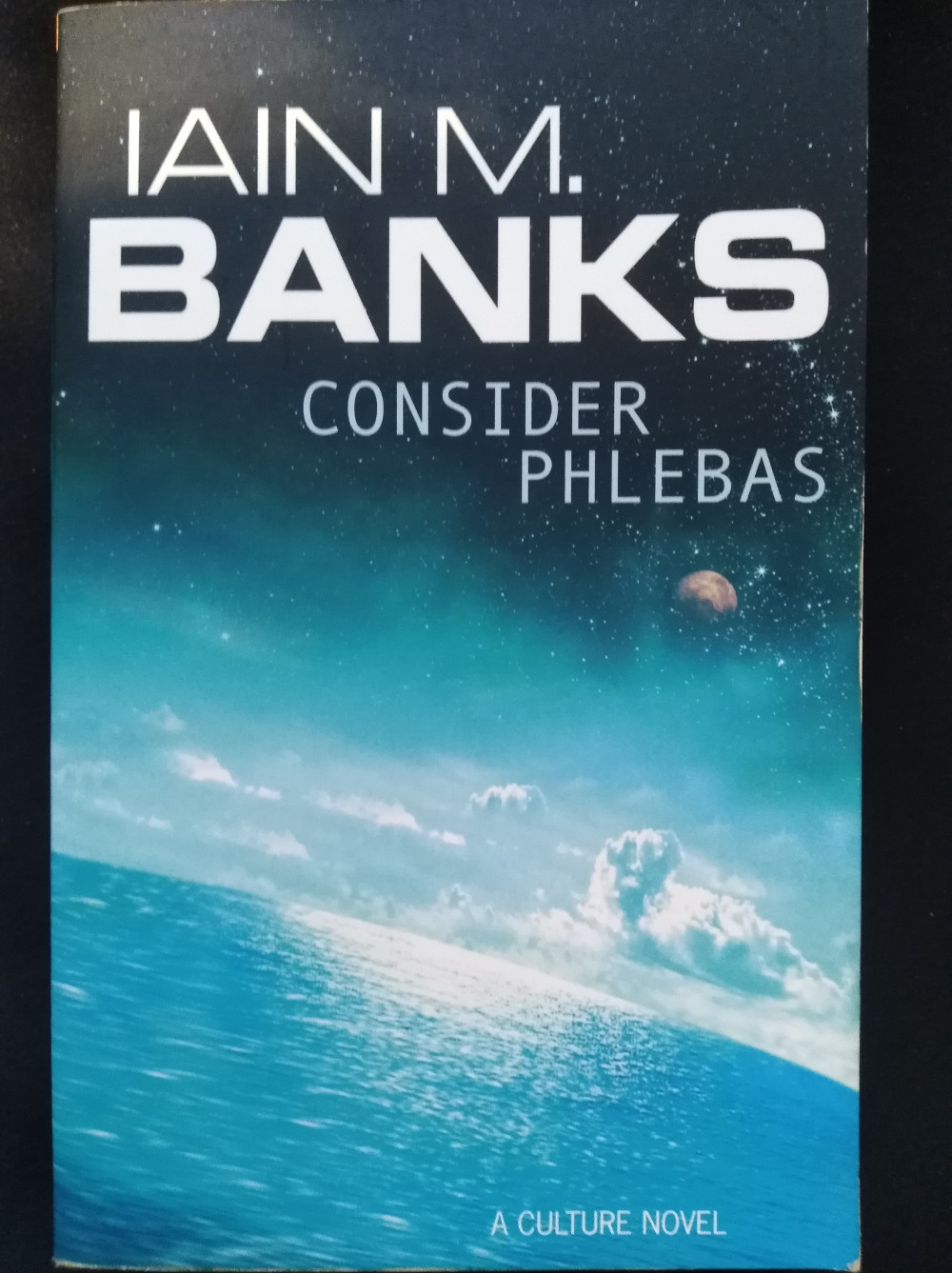 I’m writing these reviews sometimes years after having read these books.  My bookshelf now though is overflowing with science fiction books and it’s time to start taking them to the second-hand bookshop.  Rather than loose them entirely at least I’ll have a photo and a few thoughts to remember them by… and you may have guessed by now that I don’t remember much about this book, and even the back cover isn’t helping to jog the memory. I do remember though that, as is often the case in modern sci-fi, the author successfully created a well threshed-out fantasy world brimming with detail.  Wait… I just remembered there was a space ship chase though some larger space city thing.  That was pretty good. On the whole I tend to prefer the older, shorter sci-fi books, but still I have to acknowledge the achievement.  Banks is not one of the most popular sci-fi authors for nothing. I also remember the end was like an action-packed action movie – full of visual imagery with vehicles crashing and so on.  I don’t think this sort of thing works at all well in novels. Novel action and movie action are different things – please don’t…

The fourth in the Ender’s Game series.  Well… there’s a reason why a “trilogy” is a thing and a 4-book series is not.  Perhaps by book 4 an author just needs a rest or a change in scenery – maybe a trip to Risa?  There’s altogether too much bitching between the main characters in this novel.  Also somewhere in one of the last books instantaneous space travel was invented which I don’t approve of.  It makes it too easy to pop in and out of any situation.  There was a reason why the universe was given the speed of light and causality, and it was to add discipline to novels.  The viruses are pretty good though. 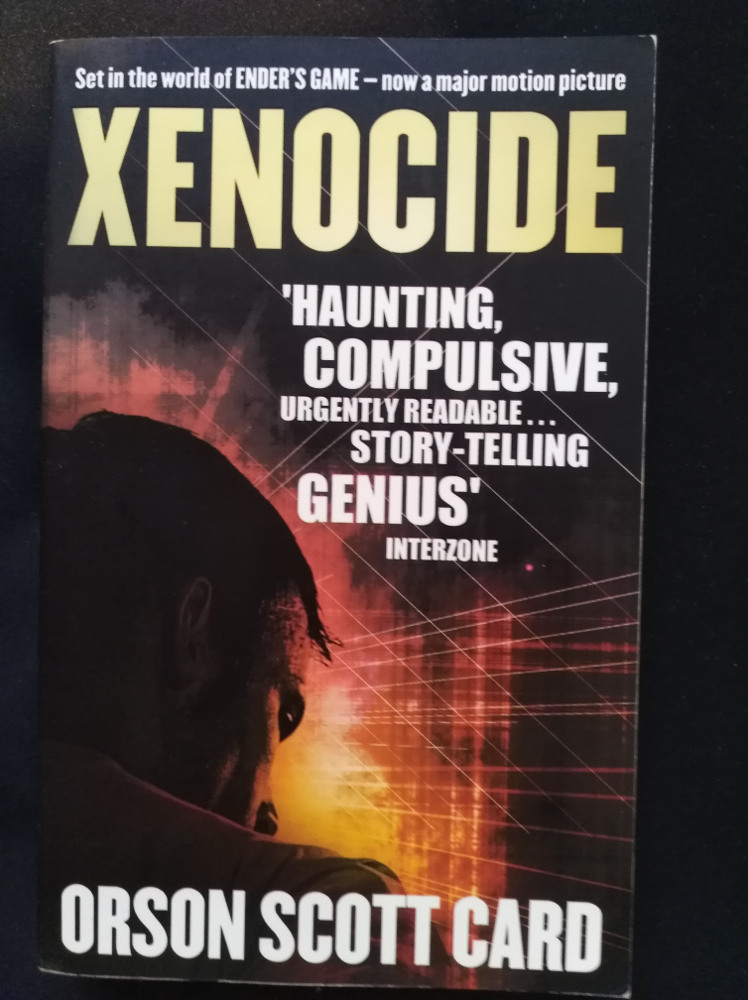 The third in The Ender’s Game series.  I thought this one was rather good.  There’s a bit of Chinese culture in there which gives things a different flavour.  Borrowing from other cultures is sometimes a bit frowned upon in literature and art, but you need to get a bit of diversity into the lands of the future somehow.  A number of sci-fi books have done well from this approach: Dune, The Man in the High Castle, Lord of Light to name a few. This book once again has quite a different feel from the first two novels in the series.  More politics, more epic.  Having said all that I read the book a fair while ago and if asked to describe what actually happens in the book I’d be hard-pressed to tell you.  Maybe Wikipedia? 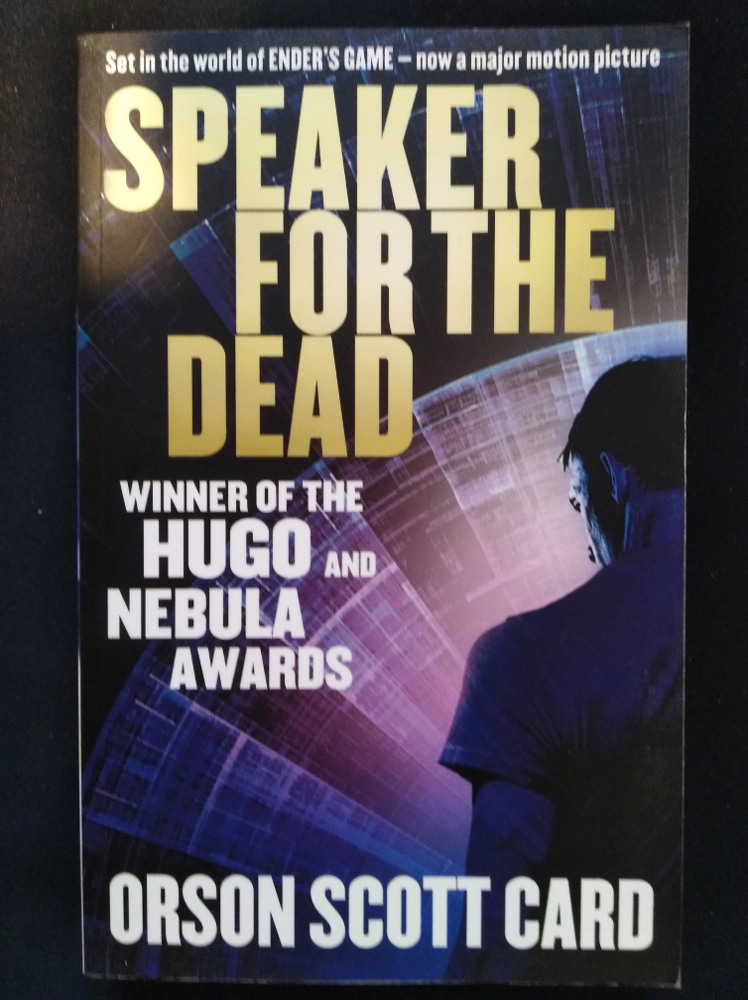 The second in the Ender’s Game series.  It has a rather different feel from the first novel, which is very tight, simple, compelling and classic.  This one is a bit more of a fantasy sci-fi novel.  There are a few interesting alien species living on a planet and at risk from humanity.  Ender wants to protect them and form a Federation of Planets (no, that’s Star Trek isn’t it?).  I liked it enough at the time but it’s not classic enough for me to re-read. As a side note it does take advantage of a technique rarely used in sci-fi to good effect: the use of very fast space ships to travel into the future. Is time travel possible? Sure – at least travel into the future (the past is more problematic), provided you have a spaceship that can travel near the speed of light – it’s in Einstein’s special theory of relativity. As a side-side note, if you want immortality you could possibly invent such a spaceship, travel into the future to a point where medical science has eliminated ageing, and Bob’s your uncle.  Then again, it might be simpler to become a medical scientist and cure ageing yourself…. 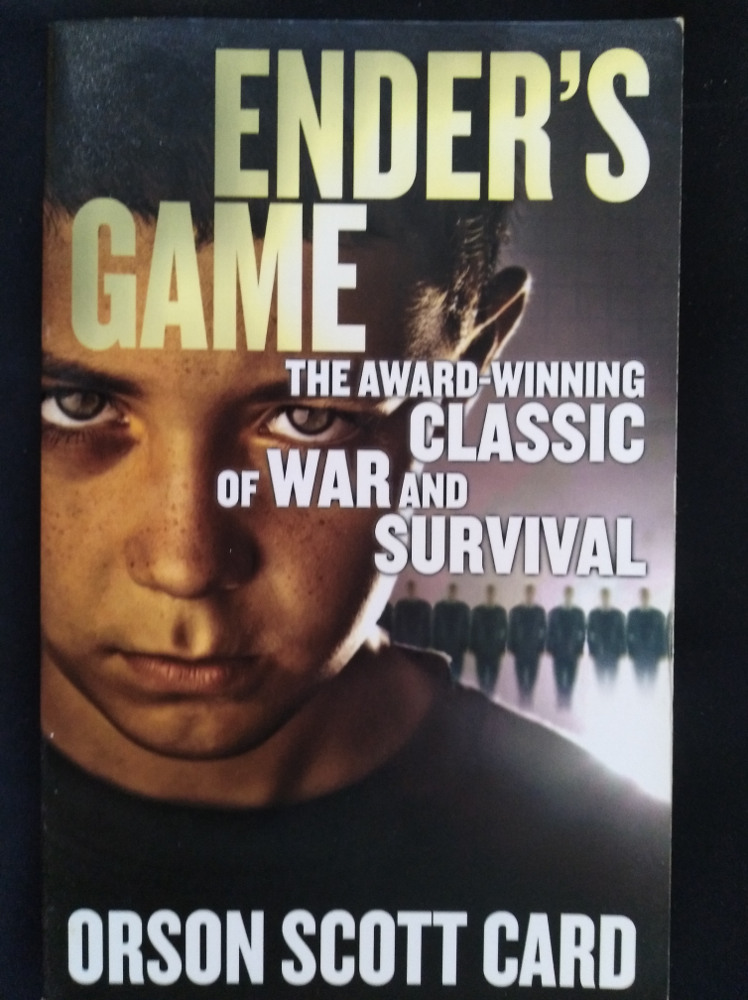 Well it’s famous isn’t it?  So if you want a proper review you can get one of 1000s from the web, or go to Wikipedia. It is well written and I enjoyed reading it.  Orson Scott Card cites Asimov as a major influence and I can believe it as they both have an easy-to-read, more-ish quality to their writing.  This book though is much more like a Heinlein: boy goes out on space adventures, is better than regular people, beats the bugs.  A bit like Starship Troopers combined with Assignment in Eternity and add a dash of Space Cadet.  Unlike a Heinlein the protagonist does feel guilty at the end of the book and has little control over his destiny. It’s stand-out features I guess are the space battle game which is explained in great detail, the game on the computer pad (ahead of its time) and the compelling, easy flow of the writing. Apparently the series was conceived around Xenocide (the third book in the series) and this one was just an nice bonus.

This is my first sci-fi book review and consequently it isn’t likely to be very good.  How fitting then that it should be about a book that isn’t very well written.  There’s a lot of action in it which is OK but never great and there is a love affair that is very thin indeed. Just as well science fiction isn’t all about the writing!  Introduce a new idea, or maybe popularise or develop an old one and that’s a contribution to the cultural and intellectual  wealth of humankind right?  Now how many movies and TV episodes have we seen in which a plague is delivered via a space ship to the unexpecting denizens of some future land?  If you’re me you’ve seen quite a few.  Do these stories owe their existence to this book published in 1965? Google suggests not. Apparently there was a TV series called Tales of Tomorrow with an episode in 1952 called Plague from Space (see http://www.imdb.com/title/tt0717040/  ) that appears to be built around a rather similar idea.  And I reckon there’s a pretty good chance the storyline was hanging around before then.  This is an interesting case study on how hard it can be…