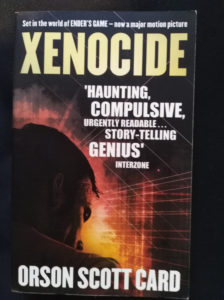 The third in The Ender’s Game series.  I thought this one was rather good.  There’s a bit of Chinese culture in there which gives things a different flavour.  Borrowing from other cultures is sometimes a bit frowned upon in literature and art, but you need to get a bit of diversity into the lands of the future somehow.  A number of sci-fi books have done well from this approach: Dune, The Man in the High Castle, Lord of Light to name a few.

This book once again has quite a different feel from the first two novels in the series.  More politics, more epic.  Having said all that I read the book a fair while ago and if asked to describe what actually happens in the book I’d be hard-pressed to tell you.  Maybe Wikipedia?