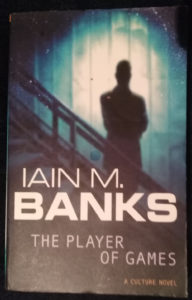 I enjoyed this novel very much, and I even bought a copy for one of my brothers.  He hasn’t said anything about it so maybe he didn’t like it, but then again he may not have read it.  I don’t think he likes sci-fi much… so why did I buy him an Iain M. Banks novel then?  Hmmm…

Like Consider Phelbus which I seemed to be reviewing only minutes ago this novel has lots of detail.  In this case I think it gels better. We are treated to a good inside view of one of Banks’ space cities.  To me space cities makes sense – there’s so much real estate up there, why not use it?  There’s no gravity well, no friction to worry about, etc.  People these days always seem to be obsessed with finding habitable planets – but why?  Shouldn’t we be looking in the space between the planets?  This is the first book I read that really took this idea to heart, and described convincing space cities.

Anyway, what are people to do in a future where machines are smarter than them and nurse over them and everything is geared towards them becoming decadent lotus eaters?  Well, becoming a galactic champion games player is one avenue for advancement.  Or perhaps interstellar espionage? Why not both?

It also occurs to me that this book does what Asimov’s Foundation pretended to do, but didn’t really.  In Foundation Asimov describes psychohistory – the science of predicting the future.  When it really comes down to it though we see very little of the science in action.  In The Player of Games the machines are sophisticated enough to control the future with a few minor tinkerings, and we are treated to an inside view of one of these interventions.